The story of Petco Park park isn't a very original story. The Padres were playing at Jack Murphy Stadium, a mixed use stadium that was used by the NFL's Chargers and UCSD Aztecs. Just like the Reds, Pirates, Phillies and Indians, the Padres petitioned the public for a new stadium, saying that a mixed use stadium isn't suitable for baseball, and got some support, to the tune of 57% of the total cost ($206 million from the City of San Diego, $76 million from San Diego County and $21 million from the Port of San Diego). The park got built. The City got an All Star Game and the rest is history. 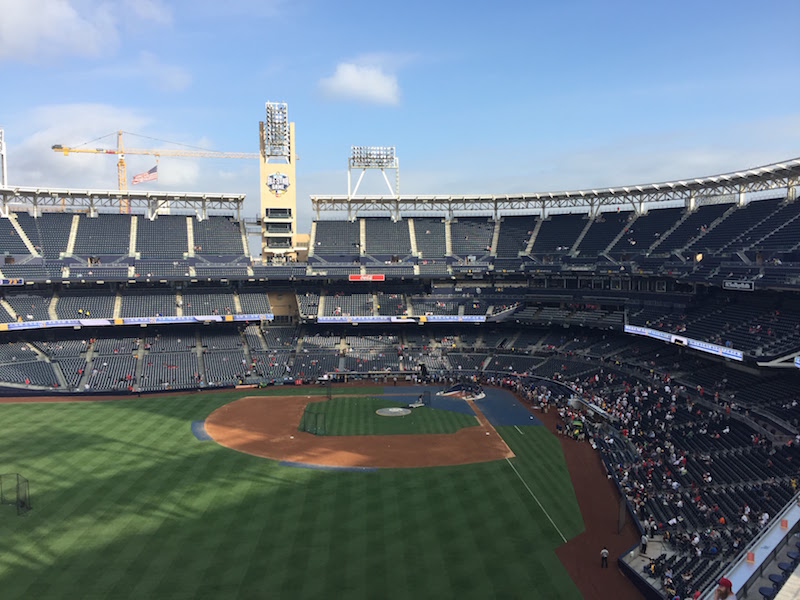 Larry Lucchino, the owner of the Pawtucket Red Sox, as of this writing in 2016, has been a pretty important baseball executive when it comes to baseball parks. In his time, he has presided over the construction of Baltimore's Camden Yards, Petco Park and the rehabilitation of Fenway Park in Boston. This park was due to open in 2002, but politics delayed this by two years. A court decision nullified the voter passed proposition that contributed the City's financing portion forcing another public vote. The second is that the Western Metal Supply Co. building was declared a historical landmark in 1978 and couldn't be demolished. This is a good thing, as the park beautifully incorporates this piece of architecture into the outfield and it houses private suites and the team store. 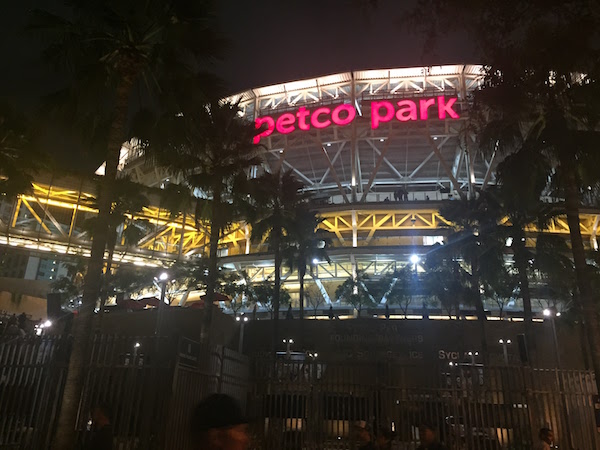 During this park's construction, "retro" was all the rage, with exposed brick and steel beams and dark green seating. Although this park is still in the "retro" vibe, there are unique design features. Primarily is that the park is made of sandstone and stucco, which is supposed to remind you of San Diego's cliffs and beaches. The seats are blue in honor of the Pacific Ocean. The exposed beams are painted white and are supposed to remind you of sails. Ironically, the only "retro" element in the design is the before mentioned Western Metal Supply Co. building, constructed in 1910. 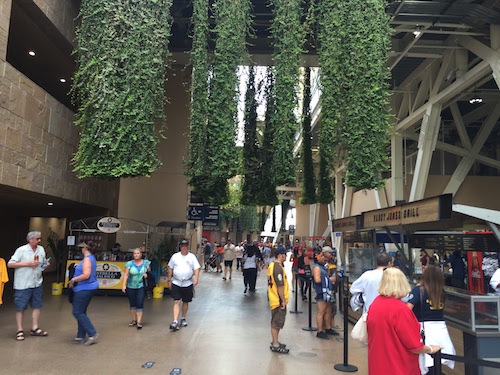 Of all the parks I have been to, this park best incorporates it's neighborhood into the experience. The concourses, adorned with hanging moss and other plants (see above), are not only open to the field but also the surrounding streets. In the outfield is the "park at the park", which takes the classic minor league outfield grassy seating area and enlarges it. There is a hill you can sit on and see into the field in addition to the game being broadcast on the back of the scoreboard. There is also a small baseball diamond and a statue of Tony Gwynn out there. When there are not games going on, this park is open to the public.

The light towers have been built to accomodate luxury suites. When the Padres hit a homerun, a ship's whistle is blown. The whistle is a recording of the USS Ronald Reagan, a nuclear air craft carrier that called the Port of San Diego its home until 2012 when it moved to Bremerton, WA to undergo repairs. 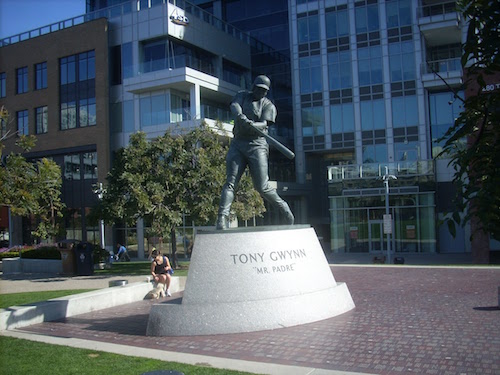 Padres retired numbers are (in numerical order and the years they were retired):