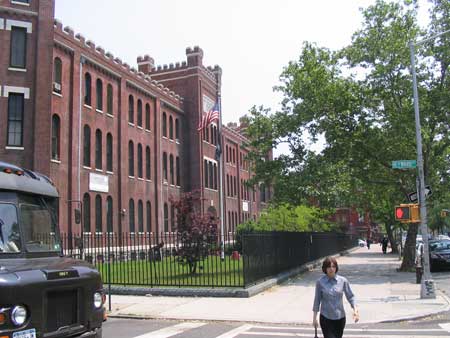 The present day location of the Union Grounds.

This is one important park. It is not important because it was home to the NL New York Mutuals who were thrown out of the League for failing to make their final road trip because they felt as though they lost enough money for the year. The park is not important because the Brooklyn Hartfords played here. The Hartfords were originally the Hartford Dark Blues but the owners decided to move them to the more profitable New York area. The move didn't work. Ok, give up? Well let me tell you.

This was the first enclosed baseball park. Why was this important? Well, with the popularity of baseball skyrocketing, almost every patch of land in Brooklyn was turned into a baseball diamond. One New Yorker commented "Godspeed the churches and ball clubs of our sister city." (Brooklyn was known as the city of churches.) Anyway, William Cammeyer got the idea when two teams of all-stars, one from New York and one from Brooklyn, played a three game series at Fashion Race Course on Long Island. Admission was 50 cents. So Cammeyer built the first enclosed baseball park and on April 18, 1869, he charged admission of 10 cents. The rest, as they say, is history. The Standard wrote "These grounds, if managed properly - and there is little doubt but that they will be - could be made not only to prove very profitable, but a credit to the section in which they are located."

The Union Grounds had its heyday in the 1870s. It was closed in 1889. Also, it was used as an ice skating rink in the winter.

Many thanks to David of Brooklyn Ballparks for helping me find this site. 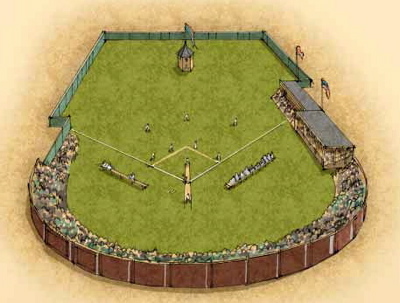