This was the site of three different ballparks. I will highlight each one separately below in chronological order.

There was a hot time in the old town at this park. Yup, you guessed it, this park only hosted baseball for one year because it was destroyed in the Great Chicago Fire, October 8 to 11, 1871. This park was a rickety old wooden park. It literally used to be a dump. Men were seated in the better section than women. A season ticket was $15. After the park was destroyed, the railroad was kind enough to support the team and help them complete their schedule on the road. 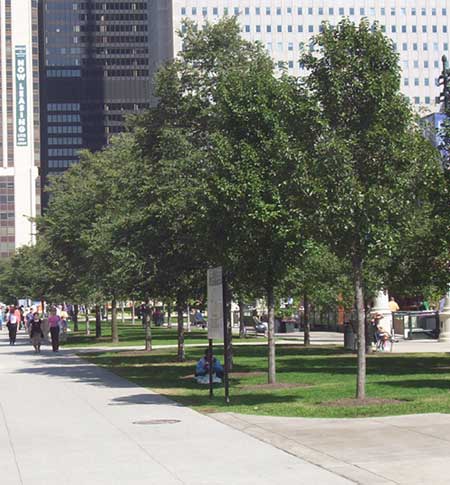 Lake Front Park II had the shortest outfield fences in the majors, ever. In fact, a ball hit over the left field wall in 1883 was considered a double. In 1883, the Cubs hit 13 homers, while in 1884, when a ball hit over the left field wall was a home run, they hit 142. This park, home of Albert Spalding's team, was considered the finest in the majors. In 1883, Spalding invested $1,800 into renovating the field. The grandstand was enlarged to seat 2,000 and the bleachers to seat 6,000 with room for an additional 2,000 standing room people. There was a ornamented pagoda near the main entrance to hold the First Cavalry Band. On the third base side, there were 18 luxury "sky"-boxes, equipped with armchairs and curtains. Spalding had one with a phone and a gong so he could conduct his business. After the 1884 season, the Cubs were forced to leave Lake Front Park II for legal reasons. The land that the park was situated on was given to Chicago by the Federal Government for non-commercial uses. Plus, after the 1884 season, the National League set the minimum distances for the outfield fences at 210 feet. 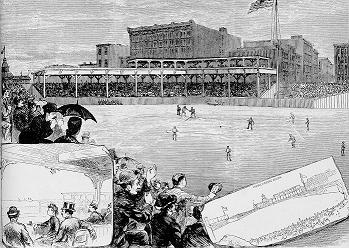