This park is something else. The only reason why it scored so high is because this park represents the end of an era. First of all it is one of the oldest parks out their, first used for baseball in 1892. This park has a lot of olde time charm. The park is all wood. When you walk around the park you get the feeling of what it must have felt like to see a game at the turn of the 1800s. There are old wooden bleachers and grandstand seats. You are sitting right on top of the action, some people were talking in a normal voice to the players and they were waving to the fans. My favorite part of this stadium has to be the owls that hang in the stadium to prevent birds from nesting in the rafters. (Pictured below) That would be messy. If you like modern, comfortable parks, then this park would grade a D- for you. However, I like old stuff.

The fake owls to keep birds away. 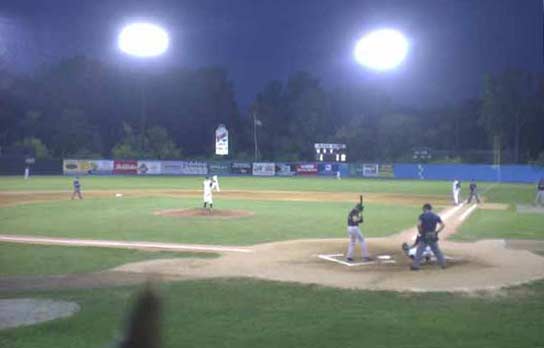 Probably the most interesting thing about this park is that it faces west, and there is only one other park in the country built this way. Why you may ask, well this park was built when games were played in the afternoon, so there was no need of facing parks in other directions. As a result, there have been "sun delays" as the sun sets into the batter's eyes, blinding them. The only other park facing west is Sam Lynn Park in Bakersfield, CA, built in 1941.

The current stadium was opened in 1950. The majority of the renovations went to holding back the Housatonic River to keep the field from being flooded.

Jim Bouton, a former Major League pitcher and a writer, recently wrote a book entitled Foul Ball, about his quest to refurbish this city owned stadium and bring a locally owned franchise to play here, but it didn't work out. The Black Bears lease is up this year, hmmm..... Unfortunatly, nothing has come of this. 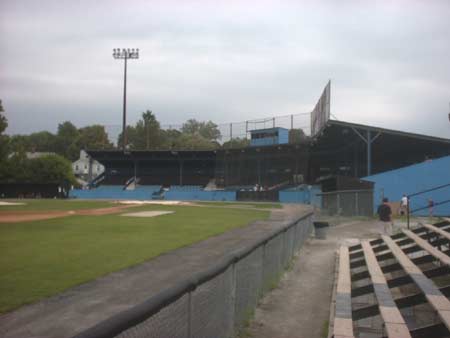