Memorable Moments: There have been an awful lot of these. Here are a few: 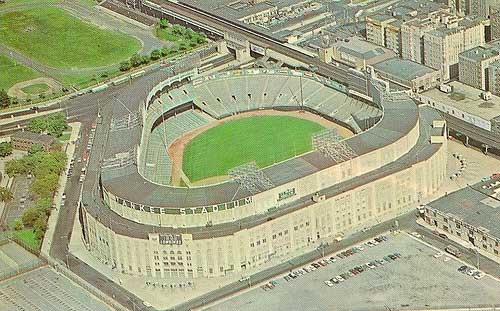 The only reason this park scores so high is because of the awe that you feel when you enter this park. It was really something looking out and seeing the arches in the outfield as well as monument park. A few interesting things that occurred were that the grounds crew danced to "YMCA" as they raked the infield. Also, when a foul ball was hit into the screen behind home plate, fans tried to get the balls with fishing nets. Now the bad, the stadium is way too cavernous for my tastes. It sits about 60,000 but it feels like 100K. You are very far back from the action. Plus the concourses and isles were way too small. At some points there was a ramp that opened up into a main isle, that was tiny, with a concession stand on the other side. So now you are trying to squeeze by the lines for the concession stands while people are walking off a ramp. All this congestion and the walk way isn't that big in the first place. Also, they show commercials on "Diamond Vision" in-between innings. 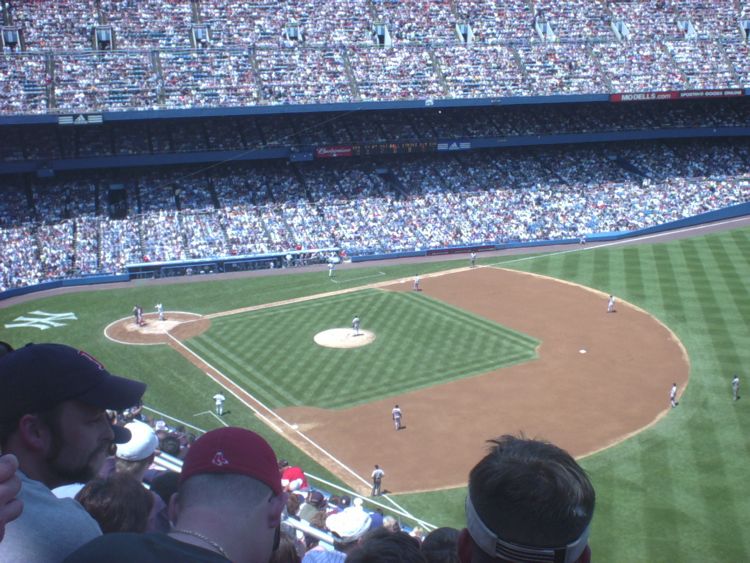 An awful lot has happened on City plot 2106, lot 100, a farm that was granted to Mr. John Lion Gardiner by the British before the Revolutionary War. On February 6, 1921, the Yankees announced that they had purchased a 10 acre plot in the west Bronx from the estate of William Waldorf Astor for $675,000. This land was directly across the Harlem river from the Yanks current home, the Polo Grounds. The land lord, the New York Giants, were getting upset with their tenants because they were selling more tickets than the Giants. The reason for this was the purchase of a new slugging outfielder purchased from the Boston Red Sox, Babe Ruth. After the 1920 season when the Yankees attendance was 100,000 more than the Giants, the Giants told the Yankees to vacate the Polo Grounds ASAP. This is why the Stadium is "The House That Ruth Built". The House That Ruth Built is also the House Built For Ruth. The stadium was built for left handed sluggers with the lower left field porch, it is an ideal situation for someone like Ruth. In the 1930s the Yankees had a green screen they would lower in front of the bleachers, so when the visitors were up, they had to look at a sea of white shirted bleacher fans, but they sure did lower it when the Yankees were up at bat. Talk about a home field advantage. The only fair ball hit completely out of the stadium was by Josh Gibson of the Negro National League in 1934. Mickey Mantle came close. Mantle also claims that Senators slugger Frank Howard hit a ball fair out of the park in the mid-60s. He said he was on the bench and it was a foggy rainy day. Howard crushed a ball that Mantle says went out. Yankee left fielder Frank White agrees. He said that he just turned around to see how far it would go, not even moving his feet. People in the stands looked for the ball for 25 minutes and it was never found. The ump ruled it a foul and no one complained due to the weather.

With the exception of a few monuments which I will talk about later, Yankee Stadium didn't change a whole lot until after the 1973 season. They added lights in 1946 and in the winter of 1966-67, the stadium got a $1.5 face lift (it was repainted). After the 1973 season, the Yankees moved into Shea Stadium for two years while it went through a major renovation. The cost was $48 million, about 20 times the original cost. During the renovation the copper art deco frieze facade that circled to roof was moved to the outfield. The other major renovation was the removal of support beams and improvements of the site lines. The Yankees want a new stadium, but due to September 11, they will probably due what their cross town buddies are doing, the Mets are renovating Shea. 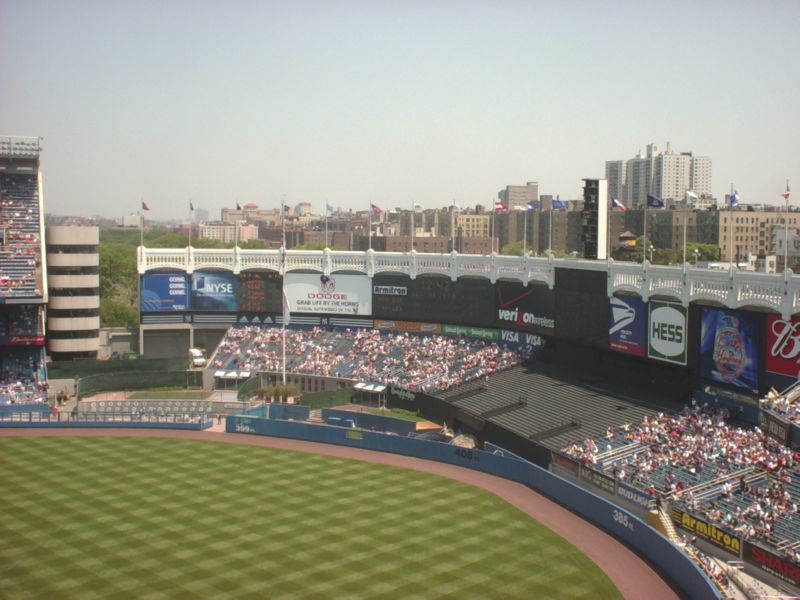 Some of the more odd things that happened here were one time Casey Stengel watched a long line drive go past his center fielder. It banged around the monuments that were in the outfield and Stengel yelled "Ruth, Gehrig, Huggins, someone throw that darned ball in here NOW!". An yes, the pine tar game. In 1983, the Yankees were leading the Royals, who were down to their last out. George Brett hit a home run that put the Royals ahead. After Brett circled the bases, Yankees manager Billy Martin asked the umpires to inspect Brett's bat to see if pine tar was illegally applied to high up. The said it was and called Brett out, game over. The Royals went crazy and the umps had to be escorted off the field. Later on the Royals manager protested the game and the American League President over turned the umpires game saying that Brett should not have been out, but the bat should have been disallowed from further use. The Royals had to finish the game on their next trip to New York. Right before the game, the Yankees Manager went to the ump and said Brett never touched home. The ump said he did. Sullivan said loudly, so the few fans could hear, "How do you know, you weren't even at that game." The ump pulled out a notarized document which the ump present said he had touched home. Sullivan went back to the dugout. Hal McRae popped up to end the top of the 9th, the Yankees were then retired 1-2-3. Royals win, game over. What a long game that was.

The Yankees have right beyond the outfield near the bullpens an area they call Monument Park. This area holds the three monuments that were in the outfield before the 1973 renovation that were in play (one to Ruth, Gehrig, and Huggins). Out there they have all of the Yankee retired numbers (not one for Jackie Robinson) and plaques to many Yankee greats, including some without numbers. Also the have plaques for two non-Yankees: Pope John VI and Pope John Paul II, the two Popes who celebrated Mass at the stadium. An interesting note about numbers: the Yankee's were the first team to use numbers and when they first gave them out, they were assigned by where they batted, that is why Ruth was 3 and Gehrig was 4.

The Yankees retired numbers are (in numerical order and the years they were retired):