Let me preface everything I say by stating that I hate indoor baseball. The roof remained closed during the two games I went to here. However, I liked this stadium overall. It was a nice break from the old old parks such as Fenway Park or Wrigley Field and the new old parks such as Camden Yards or Jacobs Field. I'm not saying any of these parks are bad, it was just nice to go to something different. Rogers Centre itself was very clean and modern looking, much like the city of Toronto. 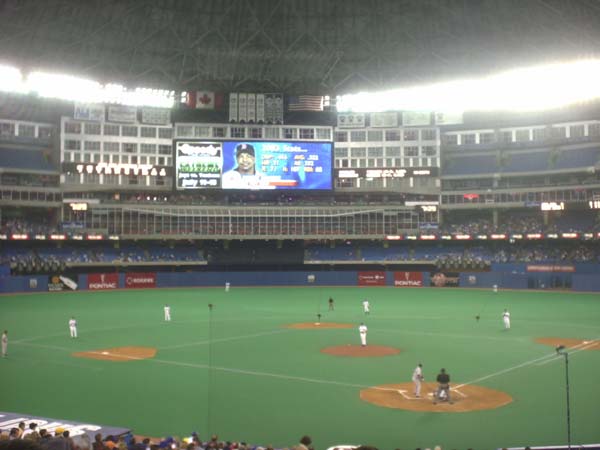 Toronto was thrilled to finally get a MLB team in 1977, who played at Exhibition Stadium. This park was not to suitable for the Blue Jays since it was designed for football and retrofitted for baseball. So in 1983, plans for a new domed stadium started. Groundbreaking took place on October 3, 1986 and on May 11, 1987. The "name the new stadium" contest winner was chosen: SkyDome. The winner two tickets behind home plate, for every function in SkyDome, for life. The "opening" ceremony took place June 3, 1989. 60,000 people showed up for this ceremony, and they got to see the world's first retractable roof stadium open up.

This stadium was very expensive, $500 million, but financed very intelligently. The Ontario Provincial government and City of Toronto each contributed $30 million. Thirty three Canadian companies, including Canada's three major breweries, each contributed $5 million for the rights to purchase a luxury box each year. The boxes cost between $100,000 to $300,000 annually, with tickets and food costing extra. 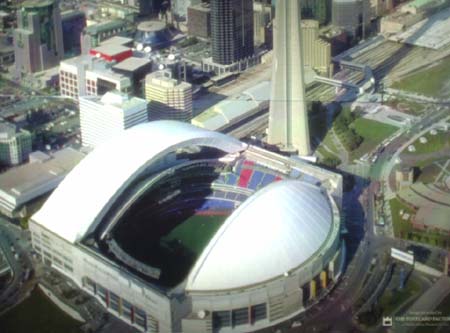 Here are some facts about Rogers Centre (from the Blue Jays):

The Blue Jay's Retired Number is: