After the Astros bent Houston over a barrel and threatened to leave if they didn't get a new stadium, the public responded with a 25 acre stadium located downtown. The park is located next to the old Union (train) Station and the park looks like a train station, complete with a train above the bleachers. There is a 125-foot tall flagpole in center, that is in play, just like Tiger Stadium. There is a 30 degree incline in deep center field, call Tal's Hill, after Tal Smith, the Astros GM who designed it after similar inclines in Fenway Park and Crosley Field. Astroturf, from the Astrodome is used in the visitors bullpen. 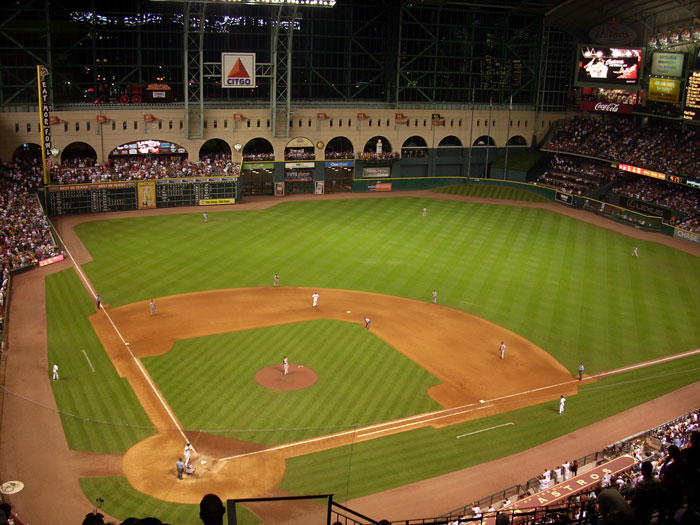 This was a nicely done park. I really like the train station feel to it and felt it was an appropriate design since it is located next to Union Station. It has great concourses and concessions. There is also a retractable roof and air conditioning when the roof is closed. Scoreboards are decent, but not spectacular, although the manual one in the outfield for out of town scores is nice. I wish the seats were at slightly steeper incline so you could see over the person in front of you a little better. All and all, a nicely done park.

The Astros retired numbers (and the year they were retired) are: