The Phillies built themselves a new ballpark, and boy did they need it. They took into account a lot of their city's rich ballpark tradition into account in this design. The ballpark is a "retro" park, with a lot of exposed brick and steel with an asymmetrical outfield. Before the field is open, they let fans into a concession family oriented area called "Asburn Alley". Named after former player Richie Ashburn, this area contains concessions and games. The concession are very Philly esque with cheese steaks and locally brewed beer. Above Ashburn alley is a lighted Liberty Bell, to pay homage to Veterans Stadium. There are also bleachers on top of the Alley which are supposed to represent "wild cat" bleachers that were outside Connie Mack Stadium on neighboring rooftops. There is also a two storied bullpen and multi-layered batters eye. The outfield also has video boards on the outfield walls near the out-of-town scoreboards, which are pretty cool.

This ballpark was obviously well thought out. It was a great place to walk around in before the game and paid a lot of attention to ballpark history. This park even boasts that each of its four corners plays tribute to the four distinct neighborhoods of Philadelphia. (Although I couldn't find the corner with the rundown ticket booths and grafitti). The park is also in a great location. It makes so much sense for a city to put all of their sporting facilities in area. The infrastructure and parking is there. This is where my issue with this park comes from. In fact, this is what keeps the park from going to four or four and a half balls. The style of this park sticks out like a sore thumb. The Vet and the First Union Center (NFL Eagles' field) look at home there. However, this park looks odd. There is a sunken playing field so you can see the game from outside the park, but no one walks by the park who isn't here to see the game. It makes no sense. If this park was in Center City or Old City, it would look great, but it looks bizzare in a sea of parking lots. 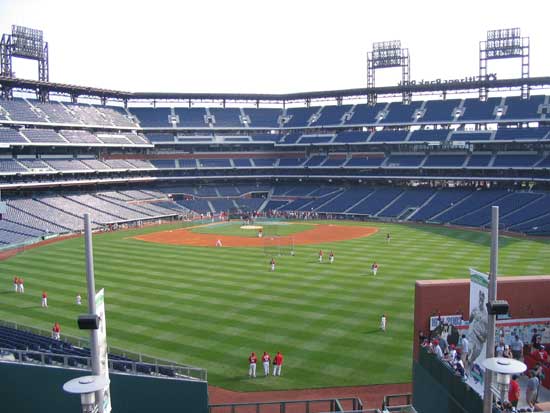 A lot of care goes into this park. There are even flowerbeds on the left field wall. The field is in great condition and there is plenty of room to walk around and enjoy the game from away from your seats. The only thing that I didn't like was there was a lot of plexi-glass screen protection everywhere that sometimes made it difficult the see the game from. All in all, I loved this field and would go back in a second. 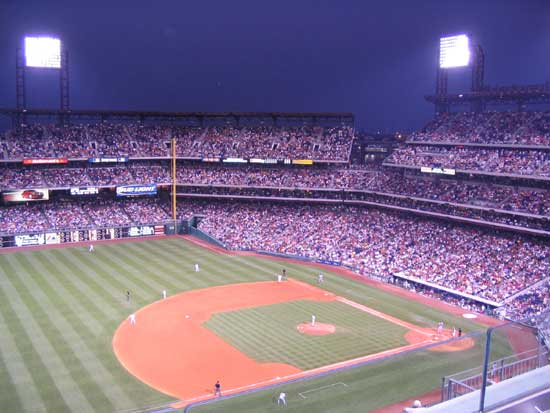 Phillies retired numbers are (in numerical order and the years they were retired): 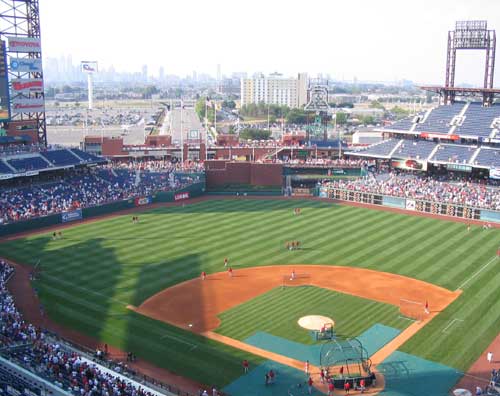 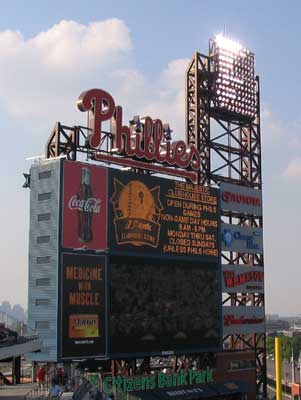