This park was named Washington Park because General George Washington's headquarters for the Battle of Long Island during the Revolutionary War was located in the Gowanus House located on the same block. The nearby factories and the Gowanus Canal made the air putrid smelling. There was a scoreboard in center field that was elevated by a pair of legs. The structure was in play, so a ball rolling under the scoreboard could result in an inside the park home run. There was 220 foot flag pole behind the scoreboard. The top part was the mast of America's Cup defender Reliance. Some lucky fans who lived in an apartment complex called Ginney Flats could watch the Bums from their living rooms.

Part of the clubhouse wall still stands and now is a wall for a ConEd gas company yard. (Pictured blow). It is in-between 1st and 3rd Sts. on 3rd Ave. It is gray paint over red brick and could be the oldest standing wall of a pro baseball stadium. UPDATE: Brooklyn baseball expert, David Dyte, check out his website, Brooklyn Ballparks here, has discovered the wall probably only dates back to about 1914 when the Brooklyn Tip Tops of the Federal League played here. 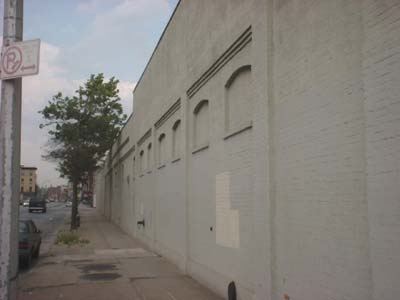