Bob Hawsam originally built this stadium for the minor league Bears, on the site of a landfill, in 1948. The stadium sat 17,000, all in one grandstand that stretched from foul pole to foul pole. Hawsam wanted to play with the big boys, and teamed up with Branch Rickey to form the Continental Baseball League. He was advised that his stadium was too small, so he added new seats in the south and east, to increase capacity to 34,657. When Major League baseball decided, instead, to expand rather than to admit the Continental League, Hawsam was in trouble. He paid out a lot of money into the park to get a team that would supposedly bring in revenue. When that failed, he turned to football, and the American Football League. He was awarded the Broncos. With debt mounting, in 1961 Howsam sold his interest in the teams and park. 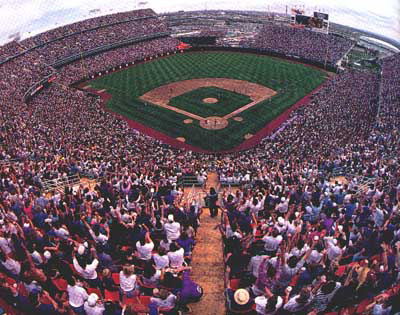 In 1966, when the two football leagues merged, one condition was to increase seating capacity to 50,000. This was completed in 1968, when the stadium was sold to the City of Denver, who renamed it Mile High Stadium, and added second and third decks along the first base line. Through 1976, the Broncos got more and more popular. Additional decks were added on the third base side and seating was increased, gradually, to 63,000. From 1975 to 1977, the north side's upper deck was expanded and a triple decked movable grandstand was built on the east side. The grandstand was 535 feet long, 135 feet tall and 200 feet deep, weighing nearly 9 million pounds. In order to move this over the 90,000 square feet that it needed to go, water was pumped onto the runways and hydraulic rams pushed the structure. The whole process took two hours, but now capacity was 76,000, and a horseshoe shaped structure could be used for football, and pushed back to a regular sized baseball field. In 2002, with the Rockies long gone, and the Broncos having moved into neighboring IVESCO Field at Mile High, the Spiritas Wrecking Company of St. Louis, MO, started dismantling the stadium. Due to the parks unique construction, it was decided not to implode it. It now serves as parking for INVESCO Field, pictured below. 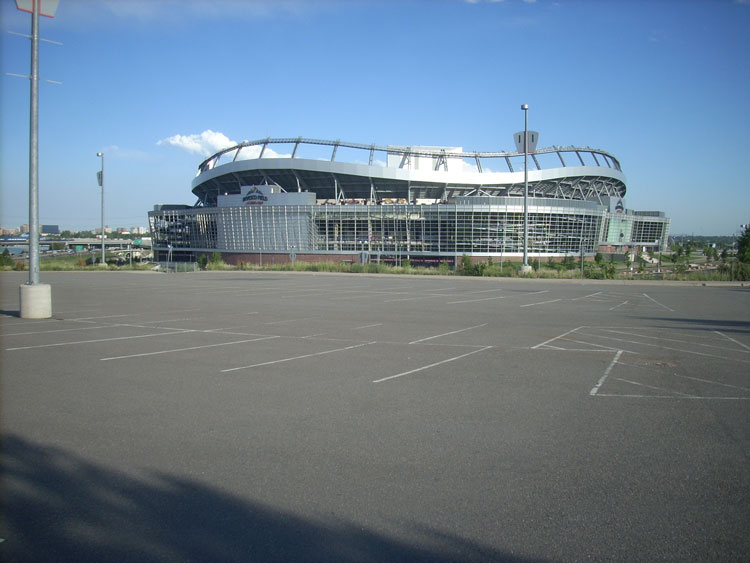