In the early spring of 1870, with news of a baseball league forming, the denizens of Fort Wayne built a ballpark to hold their team.

According to the Old Fort News: "The local citizenry, visualizing a possible championship for their fine team, jumped into the project with a vengeance and raised funds to erect a beautifully ornamented grandstand on the site of the ball park. The grandstand when finished was christened the 'Grand Duchess,' so lavish was its construction."

This from the Fort Wayne Daily Gazette, May 21, 1870: " The Kekiongas have a splendid ground for playing upon this year. They have six acres enclosed with a high, tight board fence, measuring 1,900 feet lineal, and seats for the convenience of spectators, with canopy overhead."

Also, from the Old Fort News, November 6, 1871: "The alarm of fire about 8 o'clock, last evening, was occasioned by the burning of the Grand Duchess at the Kekionga Base Ball grounds. The fire department turned out in force, but its services was not required, as the flames had gained too much headway. Ere long all souveniers (sic) of that once grand organization will have passed away." 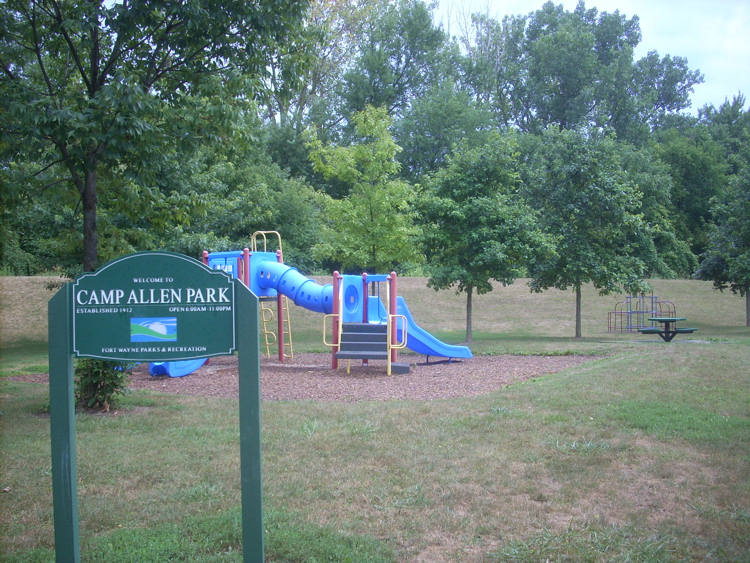 Many reference sources site that this game took place at Hamilton Field, which was a park that was located at the southwest corner of Lewis and Calhoun Streets. The land for this park was donated by banker Allen Hamilton, and this was the home of the Summit City Club that organized in 1862. The one photographed above is land just west of the Main Street Bridge, near the Nickel Plate Rail Road tracks. These were two separate parks. This information was gathered also from Twentieth Century History of Fort Wayne, by John Ankenbruck, and "Batter Up: Fort Wayne's Baseball History", Old Fort News, vol. 30, no.3.

Many thanks to Bill Griggs and Linda Chapman of the Allen County Public Library for their help.