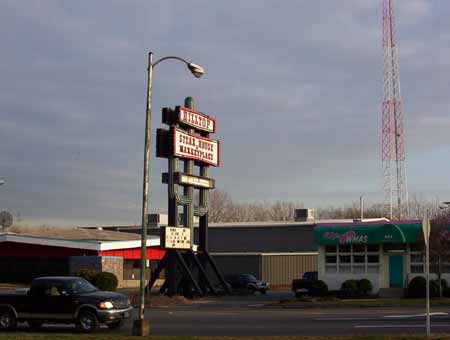 This is one interesting piece of land. In 1853 it was purchased for $15,405 by the Hampden Agricultural Society with the idea that it could be used for meetings of the National Trotting Organization. It was later turned into a recreation area for everyone. In 1863 the 46th Infantry Regiment mustered at Hampden Park for the Civil War. A horse racing track was laid out for $10,000 and in 1867, at the cost of $12,000, seating for 3,000 was constructed. During the early years of the park, there were numerous horse and bicycle races (not at the same time), running events, circuses, and fireworks. As far back as 1875, "The Game", the Harvard - Yale football game was played here.

Hampden Park was first used for baseball in the 1870s by the big league teams listed above. In 1908 fences to enclose the park and a grandstand were built. Centerfield was about 500 feet and the foul lines around 450 feet.

In 1895, Hampden Park came under ownership of the Boston & Maine Railroad and the northwest section was used as a city dump. In 1909, Springfield negotiated a lease of the dump for a ball field. In 1911, William Carey and Joh Zeller became owners of the Springfield baseball franchise and entered into an agreement to build a grandstand at the dump site. On Patriot's Day, 1922, the new ballpark, League Park, opened. The moniker "League Park" was selected with input from the public. League Park had a capacity of 4,000 in 1919, 3,500 in 1922, and 6,000 in 1928.

On September 11, 1966, a sunny Sunday afternoon, the grandstand of Pynchon Park burned to the ground. One bystander said it looked the like grandstand was behind a "wall of flame". It was a total loss.

The following information is provided by historian Thom Page:

" In 1861 when President Lincoln called for volunteer troops the 10th Massachusetts volunteer infantry regiment, which was comprised of 1,000 men from all parts of western Mass. Mustered at Hampden Park for 1 month in June, before being shipped to Boston. "

The following teams called either Hampden Park, League Park, of Pynchon Park home. (All three parks were located on the same plot of land.)