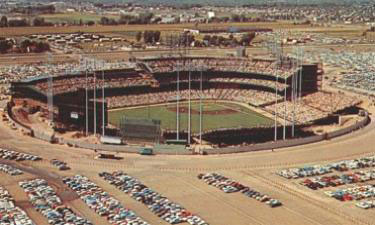 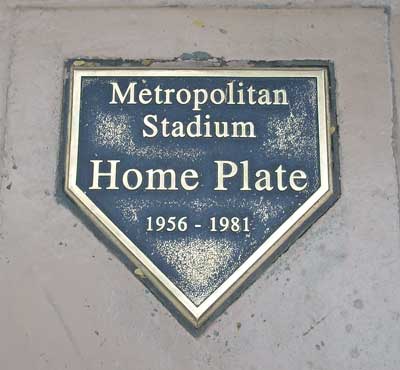 Although this stadium was built for the minor league Minneapolis Millers, it was built to major league specifications. Originally, there was a curved, triple decked grandstand that ran from first to third. This park was located in suburban Bloomington, even though the City of Minneapolis paid for the park. When the Washington Senators moved here to become the Minnesota Twins, both the Minneapolis Millers and their cross-town rivals, the St. Paul Saints were folded. This was the first baseball park to use cantilever construction to eliminate support posts and improve sight lines. The red seat, pictured below, represents a home run that Twins great Harmon Killebrew hit on June 3, 1967, to the upper deck in left, his longest shot here. 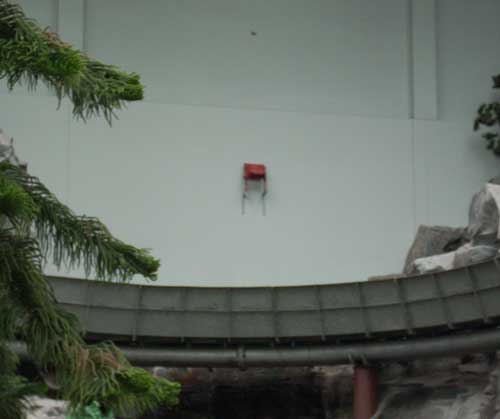 This park was expanded upon many times. In 1961, the first two tiers of a triple deck grandstand were extended just beyond the right field corner. For 1965, a double decked grandstand, paid for by the NFL Vikings, was installed in left field. This park had a strange feel to it. It was obviously a minor league stadium that was expanded. Once this park was demolished, the lot sat vacant until the Mall of America was opened in 1992.

Metropolitan Stadium Retired Number (and the year it was retired):

© 2007-17 Paul Healey. Project: Ballpark believes that use of the picture of the original stadium qualifies as fair use under United States copyright law.