This park is a good place for kids, as they can dangle things to have signed over the dugouts, which are built into the stadium walls. Hey, I did it. I have Mo Vaughn's and Pat Hentegen's signatures. The fans are good people. 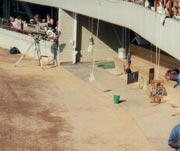 This is a great stadium,comfortable, not a bad seat. McCoy Stadium, nammed after Thomas P. McCoy, the mayor of Pawtucket, RI, from 1936 to 1945. The stadium was dedicated June 6, 1946 and re-dedicated July 5, 1992. Concessions are reasonably priced. I had a better seat than the scouts from other teams that were there and it only cost me eight bucks. There are no inbetween inning promotions. The draw here is baseball and baseball only.

I really have enjoyed this stadium. I have a lot of great memories of the PawSox growing up and it is always a great place to visit. Every year I used to buy the PawSox team set and it is fun looking over the players who made it. They recently remodeled the stadium and painted over the murals of all of the great players that came up through Pawtucket like Roger Clemans, Wade Boggs, and Jim Rice. This is a terrific stadium with very reasonably priced seats that are always great. If you live in the area, check it out.

Other teams and leagues that have called McCoy home: